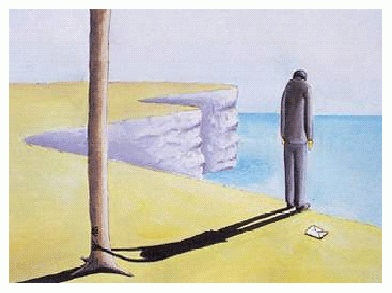 In his famous book, “Le Suicide. Étude de Sociologie” (1897), Emile Durkheim examined the relationship between industrial and financial crises and suicide rate. According the French sociologist, however, suicide is a complex social phenomenon, since an increase in suicide rate may be produced not only by economic downturns, but also by “crisis of prosperity” that alter the collective order. “Every disturbance of equilibrium, – Durkheim wrote – even though it achieves greater comfort and a heightening of general vitality, is an impulse to voluntary death”.
The adverse impact on social and health conditions consequent to the Great recession started in 2007, and to austerity policies, has been reported by diverse studies (Stuckler, 2009; 2011; Karanikolos et al. 2013). Great prominence, in particular, has been given to the many cases of suicide which occurred in those European countries that are experiencing this profound recession: Greece, Italy, Spain and Portugal (New York Times, 2012). There is, however, some preliminary evidence that seem to confirm the Durkheim’s thesis, that is of a relationship between economic crisis and suicide rate.
A significant rise in suicide numbers due to the recession in Italy and Greece has been, for example, reported by De Vogli, Marmoth and Stuckler (2012) and, for the EU member States, by Stuckler et al. (2009). A study conducted in Greece on a sample of 2,256 individuals, has indicated a 36% increase in attempted suicides between 2009 and 2011. In a review on the effects of the financial crisis and current austerity policies on health, Karanikolos et al. (2013) suggested that 2007 represented a turning point for suicide trend in the EU (15 and 12 countries): after a fall registered in 2000-2007, suicides then increased. There is, however, some discordant evidence in this regard from the Baltic States: despite their also being hard hit by recession, suicides do not appear to have increased to any real extent (Stankunas et al. 2013).
This note presents some data on recent suicide trends in Italy. During the period 2007-2012 real GDP per capita in Italy shrank, cumulatively, by -8.5 percentage points, and total unemployment rates passed from 6.1% to 10.7%. The crisis was thus severe and prolonged, and led to a significant decline in average living standards. To illustrate suicide trend, I have used data provided by the Italian National Institute of Statistics (see reference). This data lists types of suicide based on motive, including suicide for economic reasons. As illustrated by Figure 1 in the period 2003-2008, total suicide rate declined, while the impact of recession on post-2007 trend appears to be negligible. The trend of suicides due to economic motives, illustrated by Figure 2, is notably different: after 2007, these suicides actually increased. For Italy, De Vogli, Marmoth and Stuckler (2012) estimated 290 excess suicides and attempted suicides for economic motives, attributable to economic recession. Among the variables related to business cycles, unemployment has been found as strictly related to suicides (Ceccherini-Nellie and Priebe, 2011). Even though, in Italy, after 2007, unemployment dramatically increased, in the considered period, however, unemployment rates and suicides due to economic motives do not seem to be correlated.
Nevertheless, data show how, with respect to 2007 levels, the number of suicides in 2010 was 34% higher among the unemployed, 19% more among the employed and 13% more among retired people (Figure 3). It is important to note, however, how for all three categories the trends had declined since 1995, then reversed in 2008.
The availability of data, updated to 2010, allows us to derive only very preliminary indications: in Italy, in fact, the recession and rising unemployment, have continued up to present (2013). Furthermore, the differences in trends between total suicides and suicide for economic motives, suggest that great caution is required when interpreting data regarding such a complex phenomena. 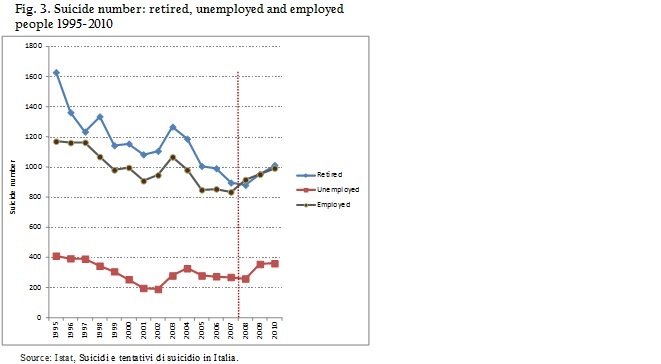