Keynesian Multiplier | Olivier Blanchard, former chief research officer at the International Monetary Fund, has suggested that the growth forecast errors during the European crisis could be accounted on the underestimation of the so called “multipliers” of autonomous expenditure. In other words, the IMF, the European Commission and other institutional analysts were systematically wrong in GDP forecasts for several European countries because they understated the expansionary effect of public spending and the contractionary effects of austerity. Written in collaboration with Daniel Leigh and published for the first time in an IMF Outlook and later as an academic paper, Blanchard’s contribution caused some outcry: portrayed as a sort of IMF mea culpa, it has been read as a sign of a comeback of an albeit very moderate Keynesianism in the agenda of the main international institutions.

Blanchard and Leigh’s key proposition is that in the two-year period 2010-2011 “fiscal multipliers were substantially higher than those implicitly assumed” by the IMF. This claim is based on the correlation analysis showed in the graph below. The estimation is run on 26 European countries. For each of them, the forecast of fiscal consolidation is reported on the horizontal axis, while the IMF growth forecast error is displayed on the vertical axis. 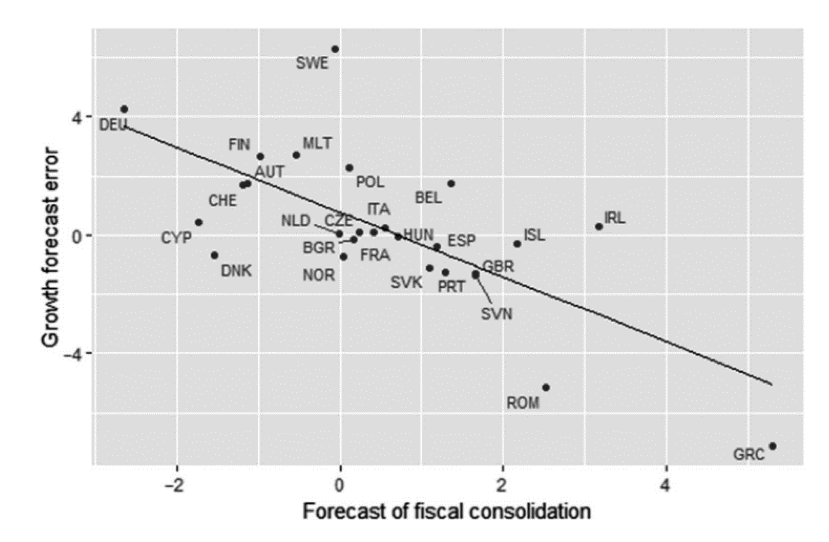 A reproduction of Blanchard e Leigh’s analysis (in E. Brancaccio with A. Califano, Anti-Blanchard Macroeconomics, Edward Elgar 2018, Appendix by A. Califano and F. De Cristofaro)

As the graph makes clear, the countries which report the larger expected change in government budget are those for which the IMF does the largest prediction error in GDP growth. More precisely, as it can be seen from the table below, Blanchard and Leigh find that each one percentage point change in public budget is associated with an increase of 1.095 points in GDP growth forecast error.

This correlation is statistically significant according to the so-called t-statistics reported in brackets in the table (the reader can refer to the following rule of thumb: an absolute value larger than 2 means a good level of significance, as it is in this case, which shows a value of -4.29). According to Blanchard and Leigh this evidence supports the idea that the IMF underestimated the multiplicative effect of fiscal policies on GDP.

In their new book titled “Austerity”, Alberto Alesina, Carlo Favero and Francesco Giavazzi suggest a different interpretation for this result. According to them, the spike in the interest rates which took place in 2010 and spurred the Eurozone crisis might have led several countries to try to gain back markets’ confidence by implementing austerity measures harsher than planned. The growth forecast errors, thus, would not have been caused by an underestimation of the Keynesian multiplicative effects but by an underestimation of the fiscal contraction actually realized in such turbulent stage of the European crisis. Thus the correlation estimated by Blanchard and Leigh would be spoilt by the fact that long term interest rates were omitted from the analysis: this omitted variable could in fact be the real cause of austerity policies being more draconian than expected and a consequent fall in GDP that was deeper than the prediction of the IMF.

In support of their challenging view, Alesina, Favero and Giavazzi propose a revised version of Blanchard and Leigh’s test, in which interest rates variations between 2007-2009 and 2009-2011 are also included. Without going into details, we just point out their main result, as reported in the second column of the table. As it is shown by the t-statistics in brackets, once that the expected fiscal consolidation and the variation in the interest rates between 2009-2011 are both included in the analysis, they are not significantly correlated with the GDP growth forecast error. Given that they are, instead, statistically significant when considered in isolation one from the other, this result would imply a correlation between them. Alesina, Favero and Giavazzi claim that this evidence supports their alternative interpretation while questioning the “Keynesian” one by Blanchard and Leigh.

In our view, Blanchard’s thesis stands up to the empirical checking while the attempt of refutation by Alesina, Favero and Giavazzi is debatable. That is why, after having often criticized his approach, we think it is right in this case to spell out a “Pro-Blanchard” statement.

There are many reasons why the analysis suggested by Alesina, Favero and Giavazzi does not persuade us. We will discuss specific technical objections elsewhere, while here we will focus on some logical criticisms that we already presented in a recent debate with the three authors, Mario Monti and others at Bocconi University.

Firstly, even if we accepted the hypothesis of a correlation between fluctuations in interest rates and prediction error on growth over the same time period as proven, this would not imply that the cause-effect relation goes from the former to the latter, as the three authors claim. The causal link could as well be reversed, from GDP to the interest rates, and this would seriously challenge their argument.

Secondly, as the reader will notice, not only did the three authors add the variation of the interest rates to Blanchard and Leigh’s test, but also they made another substantial adjustment which consists in splitting fiscal policies in two different groups: expansionary measures and contractionary measures. No clear reason is provided in the book for this important novelty. A possible exegesis may be drawn from the fact that the alternative interpretation of Alesina, Favero and Giavazzi is related to “high debt” countries, which in their view would have reacted to the sudden increase of the interest rates with even more fiscal contraction. If this was the case, however, “high debt” countries and countries which adopted austerity measures should coincide, which would have to be proven. More generally, the exercise run by the three authors would leave a fundamental question open: why have forecast errors concerned countries that adopted expansionary policies as well?

The division between expansionary and contractionary policies proposed by Alesina, Favero and Giavazzi seems therefore unjustified to us. We think that in order to test their alternative interpretation it is more appropriate replicating the original analysis by Blanchard and Leigh, with the only modification of adding interest rates fluctuations. The results of this analysis are shown in the last column of the table. As the reader can notice, the outcome of the test is again in favour of the “Keynesian” argument of Blanchard and Leigh. Even including the interest rates in the analysis, the correlation between forecast of fiscal consolidation and growth forecast errors remains statistically significant, with a t-statistics of -3,14; moreover, the new coefficient of 0,813 is not statistically different from the original one of 1,095, with a confidence level of 90%.

The competing view raised by Alesina, Favero and Giavazzi does not seem to be supported. Blanchard and Leigh’s thesis, according to which growth forecast errors might have been determined by an underestimation of fiscal multipliers, resists the refutation attempt. That is, the conjecture that the IMF and the other forecasters failed to predict GDP growth because of an anti-Keynesian prejudice is still in place.

* Emiliano Brancaccio is professor of Economic Policy at the University of Sannio in Benevento (Italy) and author of “Anti-Blanchard Macroeconomics” (Edward Elgar 2018).

**Fabiana De Cristofaro is a PhD student at the Sant’Anna School of Pisa, and is co-author of the Appendix of Anti-Blanchard Macroeconomics.