What just over 18 months could make in the topsy-turvy world of international politics! In November 2008, when most of the world’s financial markets had been rescued, with many governments in Western countries spending billions of dollars of bailout money during September/October 2008, the G20 countries had met not to discuss the need for deficit spending, since that was already a fait accompli that had resulted from the effects of the initial subprime crisis in 2007-2008 and the huge bailout money to prevent the banking sector from falling into a financial abyss. Rather, these G20 world leaders had met in Washington in November 2008 to discuss a coordinated “fiscal stimulus” strategy in order to avert a severe collapse of real private sector aggregate spending, which, at the end of 2008, seemed to be an unavoidable consequence of the financial crisis.

A quick look at Figure 1 shows how dramatic the change in the fiscal stance of Western countries was after 2007. Instead of pursuing policies of “sound finance” with most governments trying to climb out of fiscal deficits or target fiscal surpluses as can be seen after 2001, all these countries plunged into significant budgetary deficits after 2007 (see shaded area in Figure 1). 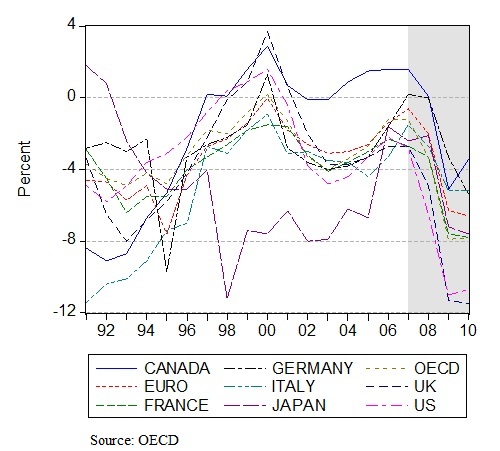 At the recent G20 meeting in Toronto at the end of June 2010, we have witnessed a complete reversal of the policy discourse. The leaders left victoriously the latest summit by achieving practical unanimity on the goals that had been proposed by the host prime minister, Stephen Harper, and other anti-deficit hawks, such as David Cameron and Angela Merkel. According to the G20 declaration, these government leaders had committed themselves to fiscal plans that would cut their deficits by at least 50 percent by 2013, and to stabilize and begin to reduce government debt-to-GDP ratios by 2016, all in the name of stabilizing the macroeconomy. Although there was some debate over the precise timetable of their “exit strategy”, as Barack Obama emphasized, on the issue of fiscal austerity “there is violent agreement between the parties” (http://imarketnews.com/node/15595). It is hard to imagine how “violently” the world political elite can “agree” to deflate the world economy in light of the mostly peaceful protests against austerity in the streets of Toronto. However, when asked about how the economy is supposed to be stabilized and brought back to a desirable high growth path, these world leaders referred to the positive effects on growth of a reduced burden of overhanging public debt, pointed to the necessity for public debt stabilization and fiscal sustainability, and highlighted the need to make way for the private sector in the growth strategy.

While it is tautologically true that public sector debt ratios can stabilize and fall only if revenues start to exceed spending, it is not at all obvious that high public debt ratios are inimical to growth and that the private sector will grow as a result of cuts in spending and/or increases in taxes. In fact, evidence from the week following the G20 summit offers some ominous signs that stand in sharp contrast to what the G20 leaders envisaged in terms of economic outcome of their proposed policies. Indeed, already over that week (after the G20 meeting), prices at the principal North American stock exchanges declined sharply and forecasts of growth were revised downward in countries, such as China, that rely on exports as their engine of growth. Despite some recently embellished forecasts from the IMF, there are real fears in world markets of a 1937-style “double-dip” recession, with these fears being reinforced by the decisions taken in Toronto at the end of June. Market expectations of future prospects for growth have not been positively influenced by the formal statement of the G20 leaders. On the contrary, concerted policies of austerity in a world economy that is struggling just to stand still could merely push many economies over the edge of the precipice, since public sector retrenchment could only feed negatively on growth through standard Keynesian multiplier/accelerator effects. This is because a public sector budgetary deficit is not some financial black hole that removes much needed loanable funds that would otherwise be available for investment purposes for the private sector; but quite the opposite, deficit spending creates private sector savings through the income-generating process.

Indeed, what the G20 leaders and their economic advisors fail to understand is an elementary accounting fact that what is a spending for one sector (say, the government sector) is necessarily a receipt or income for another sector (say, the private sector) and that what is a net spending (or a budgetary deficit) of one sector must inevitably be a positive net saving (or a financial surplus) of another sector. Hence it follows that, regardless of how they are financed, expenditures generate income, and private sector saving is merely the pecuniary accountancy of public sector deficits. This also means that any net budgetary surplus of the public sector merely destroys private sector net income or saving. In terms of Figure 1 above, one ought to just imagine this same chart but stood on its head delineating in this case the net saving position of the private sector for all those countries. For illustrative purposes, both the private and public sector balances are displayed in Figure 2, but only for the US and the countries of the Euro zone combined. Indeed, the only reason why these series are not literally a mirror of one another is because we have not taken into consideration the current account balance which could fluctuate somewhat over time and blur somewhat the symmetrical relation between the two series.

Figure 2: Net Private and Consolidated Public Sector Balances for the Euro Area and the US as a Percentage of GDP, 1991-2010 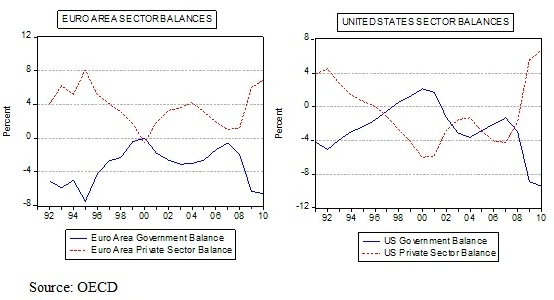 How can the prospect of lower private sector incomes and private sector savings encourage private sector growth over time? If such policies of budgetary austerity are seriously implemented, one can only imagine the catastrophic consequences of the withdrawal of the much needed spending on private sector output, resulting in a deflation of incomes (wages and profits) and a lower level of employment. What are needed are not policies that abort growth but policies that sustain it on a more permanent basis. As Keynes has been quoted to have said: “the boom, not the slump, is the right time for austerity at the Treasury.” (See http://bostonreview.net/BR35.3/kirshner.php) Such a policy framework, associated with Keynesian ideas, has been termed historically a policy of functional finance which was quite successfully implemented during the early postwar years to achieve full employment before these policies succumbed to the monetarist onslaught. Since the 1970s, several generations of young economists have had little or no exposure to these Keynesian ideas and have been trained to think that there is no alternative to the neoclassical doctrine of “sound finance” which had been discredited during the 1930s.

This is why the recent letter signed by over 200 Italian economists represents a truly hopeful sign. It affirms that yes we can imagine positive alternatives to austerity and economic retrenchment. If the Euro zone is to be saved from its own contradictions, it must pursue policies that are currently prevented as a result of the misguided neoclassical doctrines of what the authors of the letter have dubbed the “liberalist” ideology that finds its counterpart in the current institutional structure of the European Economic and Monetary Union (EMU). The letter rightly recognizes that growth in Europe can return via a policy of expansion of demand through public spending and particularly in the surplus countries of the EMU. Moreover, it points to the need for a development plan to achieve full employment through public investment much as Keynes himself had argued in the 1930s. This view stands in stark contrast to the current policies being imposed in Europe that necessitate deflation domestically.

Ironically, the only pseudo fiscal “activism” in the EMU is being pursued de facto by an unelected and technocratic ECB whose role has evolved and is now purchasing national government securities not to help finance public investments for developmental purposes in the various regions of Europe but merely to provide much needed liquidity to prevent insolvency, as in Greece. We have here perhaps the worst possible scenario. In the name of “sound finance”, the current institutional structure prevents the rightful fiscal authorities (i.e., the respective national governments) to pursue policies of expansion because of the constraints imposed by the Maastricht Treaty and the Stability and Growth Pact, which exacerbate the liquidity problems of the so-called GIIPS countries. On the other hand, the ECB has now been forced to assume the role of a recalcitrant “firefighter” that extinguishes regional fires caused by faulty circuitry imposed by the very EMU constitution, which established such a supranational central bank based on neoclassical precepts of the macro economy. Europe needs to redefine itself institutionally so as to avoid being stuck collectively in a permanent state of economic stagnation all in the name of retaining a single currency.

* Professor of Economics, University of Ottawa, and Editor of the International Journal of Political Economy